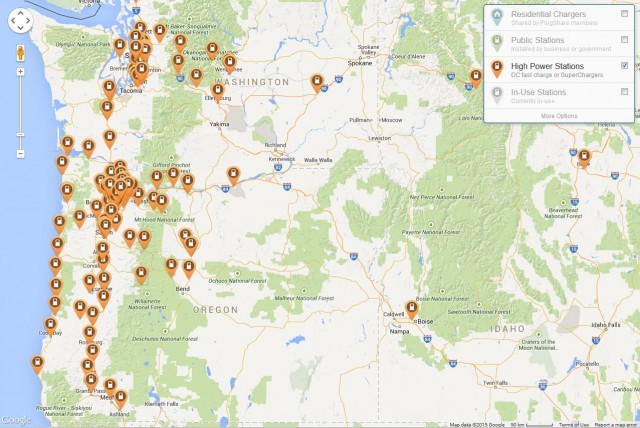 On the same day that Washington State's electric-car tax exemptions expired on June 1, an advocacy organization issued a report that said state agencies have done very little to meet a deadline to buy electric cars.

The state passed a law in 2007 requiring that all public agencies meet 100 percent of their transportation needs with electricity or biofuel by June 1, 2018. Yet less than 1 percent of the 30,000 vehicles owned by the state are electric vehicles.

Only four of 31 local government entities surveyed by Coltura, a Seattle-based non-profit, have plans to switch to electric cars.

The organization issued a report titled "Recharge Required," [PDF] supported by Plug-in America and four other environmental groups that calls for state and municipal agencies to buy electric cars first, and requires justification for any non-electric vehicle purchases.

The report notes that a wide variety of electric vehicles are available that can serve municipal and government needs, including buses, trucks, and long-range electric cars, such as the Chevy Bolt EV, and that they are cheaper to operate than gasoline cars, which can save the agencies money over the lifespan of the vehicles.

Coltura found that few fleet managers and state leaders are even aware of the law and that the state Department of Commerce has not enforced legally mandated reporting on the progress toward buying electric vehicles.

“While we often hear from our state and local leaders about the perils of climate change and the need to take action, this report reveals a shocking disregard for an existing state law requiring public entities to phase out the use of gasoline and diesel to power public vehicles,” said Matthew Metz, founder and co-executive director of Coltura. The organization says it is working to achieve a gasoline-free America by 2040.

Coltura calls for the state to adopt an "EV First" policy requiring purchases of electric vehicles "unless there is a demonstrated and urgent need to purchase gasoline or diesel-powered vehicles." The organization's report also calls for expanding grant and loan programs to public agencies to help expand charging infrastructure and pay additional up-front costs for electric vehicles, for expanding training regarding the law and electric cars, and giving the Commerce department additional authority and resources to enforce the law.

At the same time, Washington State legislators failed to renew a law that exempted purchases of electric cars up to $42,500. The state had issued 7,500 such tax exemptions over two years, but the program ran out of money. Several bills to renew it didn't pass.

California and neighboring Oregon have become primary markets for electric cars in the United States with required sales targets. Washington, while part of the West Coast Electric Highway network of charging stations, has been much slower to adopt electric vehicles, and without tax incentives, its efforts may slow further.