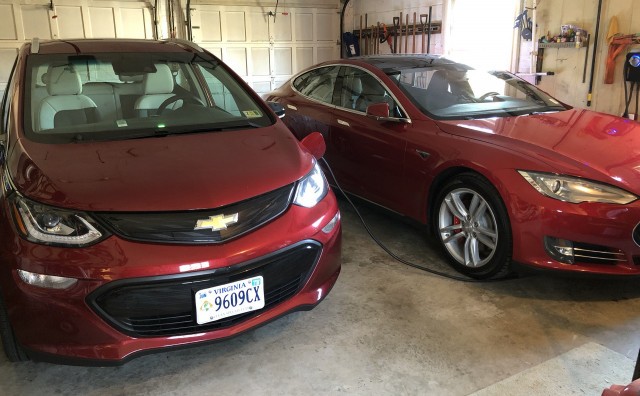 Last week in our Twitter poll, we asked a different kind of question: how often Green Car Reports readers would like to follow the horse-race of plug-in car sales.

Green Car Reports has been reporting the monthly data to see who's selling the most electric cars since the Chevy Volt and Nissan Leaf went on sale in late 2011. It gives a sense of which technologies resonate with consumers, whether it's plug-in hybrids like the Volt or battery electric cars like the Leaf, and how much electric range consumers seem willing to pay for.

In those early days, it also gave us a gauge to measure which automakers seemed serious about serving the burgeoning market for electric cars, and which ones seemed more focused on building only as many plug-in cars as regulators in California required.

We raised the question this month for a couple of reasons. Mainly, two of the biggest sellers of electric cars, General Motors and Tesla don't report monthly sales numbers. Tesla never has. GM announced that March would be its last monthly report, and it would begin reporting sales quarterly, as Tesla does.

Without numbers for five of the most popular electric cars on the market—Tesla's Models S, X, and 3 and Chevy's Volt and Bolt EV—our report may be a little threadbare—maybe even a little uninteresting.

How often do you want GCR to report plug-in sales numbers?

Yet most of our readers say they're still interested in reading about sales every month. Almost a fifth, 19 percent, felt that more comprehensive quarterly sales would be sufficient.

To separate the question of whether our Twitter followers who think less frequent reports are OK from those who just aren't interested, we also offered options of annually, and not at all. Only 2 percent thought annual sales numbers would be adequate. Three times as many, 6 percent, identified themselves as beyond caring about the horse race. They might as well have screamed: "Tell us about the products and the teams and the trends; we don't car who wins, as long as someone does!"

We have some sympathy for that argument.

Still, it's helpful to have a gauge of success. Especially before you plunk down tens of thousands of dollars on what so far is a niche product, it helps to see what companies may be around long after to service and support the car.

Our Twitter polls aren't scientific. In this case, since we just asked about Green Car Reports, it's probably closer to a representation of our own audience than most of our polls are of the nation. Either way, we're always grateful to receive input from our readers, even if its only those who follow us on Twitter. Click on over and follow us there to join the conversation.