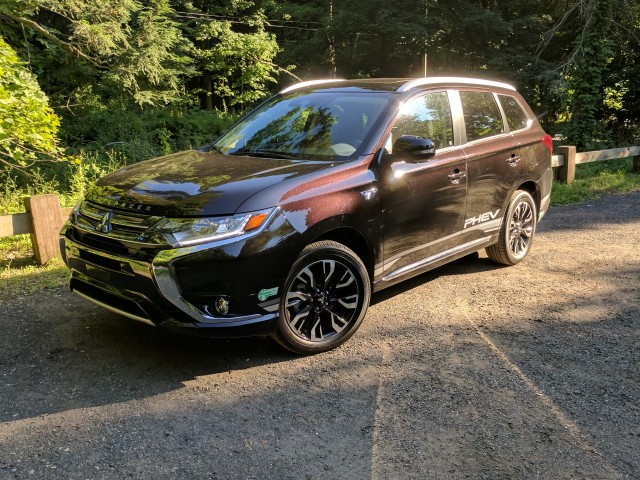 The Mitsubishi Outlander plug-in hybrid is something of a missing link in the market for plug-in cars.

There are finally plenty of choices for those who want to dispense with gas entirely and buy a small hatchback. Several electric SUVs are coming, but the only one that really lives up to the automotive ideal of driving anywhere you want at a moment's notice is the $80,000-and-up Tesla Model X with its access to Tesla’s Supercharger network. (Once VW finishes building out its Electrify America network in another six years, other electric SUVs will have similar access.)

With two cars in the prototypical American driveway, many families own at least one SUV (and increasingly two), to cover just about any conceivable need. Most of these SUVs that American families purchase by the millions burn a lot of gas. 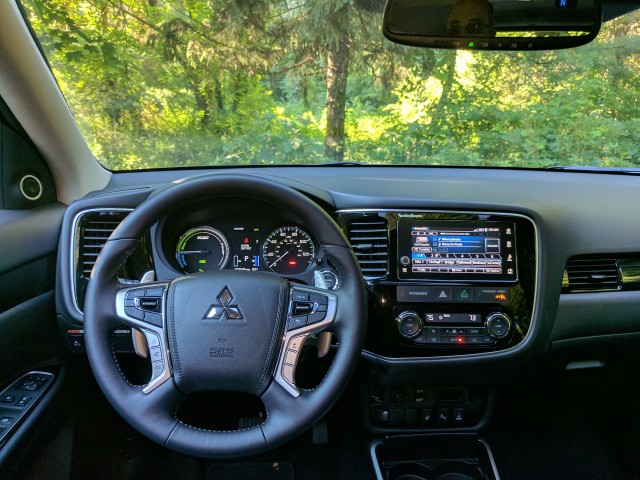 It’s easy for many of those families to see how they could replace one car that does school drop-off and commuter runs with an electric model. It’s that thirsty SUV that gets used on long family trips that’s harder to replace with an electric car.

Enter, finally, the Mitsubishi Outlander PHEV, which has been the bestselling plug-in hybrid in Europe since it debuted there five years ago. It’s not the first plug-in hybrid SUV in the U.S., but it is the first one that’s affordable for most carbuyers.

It delivers 22 miles of range on electricity, which should get a stay-at-home parent, or a grandparent, or even a local working spouse through most of the daily errands they need to accomplish on electricity, without making family trips any more difficult than any other SUV.

In our test, the Outlander PHEV got 34 mpg, even with an empty battery. We traveled roughly 130 miles.

The Outlander PHEV works similarly to the latest Honda hybrids, with a 117-horsepower, 2.0-liter inline-4 set up in series with electric motors driving the wheels. When the engine is running, it can clutch it in to drive the front wheels mechanically at highway speeds, for a total range of 310 miles on gas and electricity.

One 60-kw motor drives the front wheels and another the rear, giving the Outlander PHEV all-wheel drive and 197 total horsepower at the road. With the electric motors’ instant torque, it feels quicker than most other small SUVs. 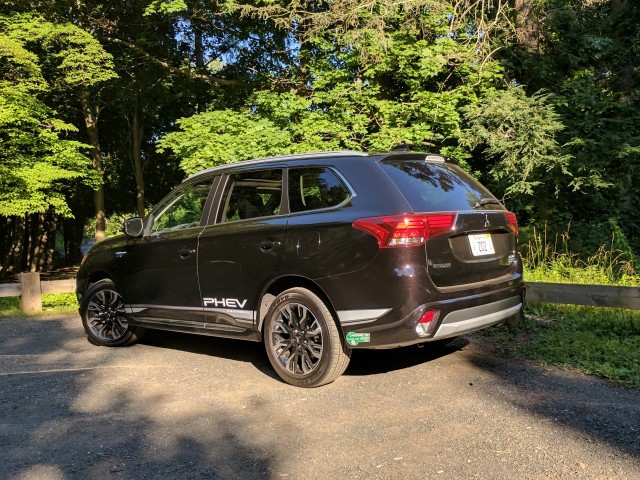 A 12-kwh lithium-ion battery pack hangs under the floor. The Outlander PHEV is the only plug-in hybrid on the market in the U.S. with a CHAdeMO quick-charge port, which can recharge the battery to 80 percent in about 25 minutes. On a Level 2 charger at home, we confirmed that it takes about the 3.5 hours that Mitsubishi expects to charge the battery from empty.

What the Outlander PHEV lacks compared with the standard Outlander is a third-row seat. Mitsubishi says the space was needed for the rear motor and the charging system.

We had a chance to drive the Outlander PHEV for nine days around rural and suburban Connecticut, and found it mostly lived up to its purpose.

The powertrain does its best to maximize energy efficiency. It has three buttons around the shifter to set modes to maximize electric driving, save battery (and maximize gas driving), and a charge mode that will use the engine to recharge the battery for drivers who get stuck without a charge and need one. That is, of course, the least efficient means of charging the battery and the least efficient way to drive.

The three modes are more suggestions than overrides. Each has a distinct effect, but when we tried battery save mode with two miles of electric range showing on the dashboard indicator, the car went right through it. In EV mode, it took a much deeper dig into the accelerator before the engine would start, but it still did.